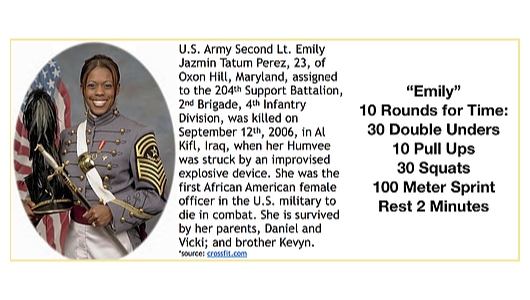 Rest 2 minutes
Second Lt. Emily Jazmin Tatum Perez, 23, was killed Sept. 12, 2006, when her Humvee was struck by an improvised explosive device as she was leading a convoy through Al Kifl, Iraq. She served in the 204th Support Battalion, 2nd Brigade, 4th Infantry Division of the U.S. Army.

Perez graduated from the U.S. Military Academy in 2005. She was an exemplary student and became the highest-ranking African-American female cadet in the history of West Point. An exceptional athlete, Perez was a sprinter on the track team (200 m) and competed in the triple jump. She also excelled at gymnastics and squats. Her favorite movements included sprinting, double-unders, pull-ups, squats and power cleans.

Perez was the first female African-American officer in U.S. military history to die in combat and the first female West Point graduate to die in the Iraq War. She is survived by her parents, Daniel and Vicki; brother, Kevyn; and many classmates and friends.
To learn more about Emily click here